Tripawds Supporter sites have no ads!
Skip to content

Tripawds is a user-supported community. Thank you for your support!

After a few back and forth emails to the University of Pennsylvania’s School of Veterinary Medicine about getting Shilo enrolled into a study today she met the vet team and was given an exam.

I signed some papers, talked about what was going to happen and hugged Shilo goodbye.

Tomorrow 4/15 in the AM she is scheduled to get a chest x-ray to confirm no lung mets and then off with the arm!  I know in the short term the amputation will stop the pain (Shilo is limping and that means she’s in pain) but I hope that the study drug will do what is has done when used on other forms of cancer:  stop it or outright kill it.

So Shilo’s in Philly, I’m at home and will have to try and sleep tonight knowing that Shilo’s will be promoted to the official rank of ‘TriPawd’. 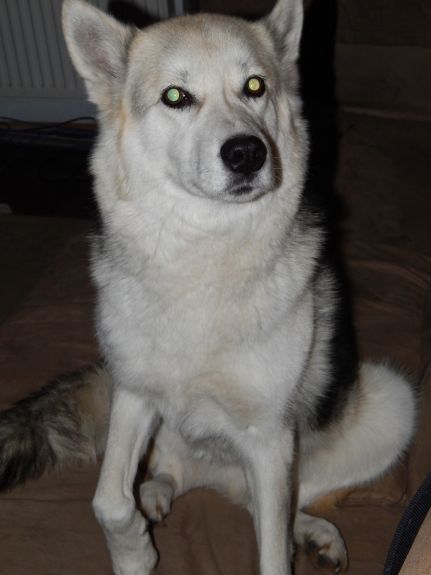 So why am I putting my Shilo into an experimental OS study?  First reason is the cost of the treatment is free.  I am a firm believe in amputation to relieve OS pain (this is my second go around with OS) and I have seen first hand the relief a dog gets from the pain of bone cancer.  Shilo’s OS was found very early, but tramidol and NSAIDs only go so far before the pain cripples a dog.   Shilo is young, healthy and already acclimated to life on three legs (well, somewhat).  Second, there is a chance that the drug may cure her.  The drug is known to be highly successful in treating mast cell tumors and they thinking is that it could be equally as successful in treating OS.  But the vet’s just don’t know for sure.  Shilo is going to die from cancer.. that cannot be helped.  But she also has the very, very rare opportunity to be treated by some top notch vets, at a prestigious vet school, for free.  I could not turn down that opportunity for Shilo’s care and to maybe find a viable treatment for OS.

I’ve mentioned cost a few times.  I know that an amputation is $1500-1700.  Chemo is $400-$1000 PER SESSION.  Radiation treatment is $600+ per session.  When you need 4-6 radiation sessions and 2-4 chemo treatments you are at $4-$5k easy.  Many dog’s never survive the chemo due to the cancer metastasizing in the lungs… so even if you spend the money you are still rolling the dice.  Vets say that radiation and chemo could add months of quality life.. but it could also do nothing.


To remove ads from your site and others, upgrade to a Tripawds Supporter blog!

7 thoughts on “Shilo the Science dog gets accepted to UPenn!”

Edit your Widgets to remove these ads, or leave them to support Tripawds.

Shilo is brought to you by Tripawds.
HOME » NEWS » BLOGS » FORUMS » CHAT » YOUR PRIVACY » RANDOM BLOG


Tripawds Supporter sites have no ads!